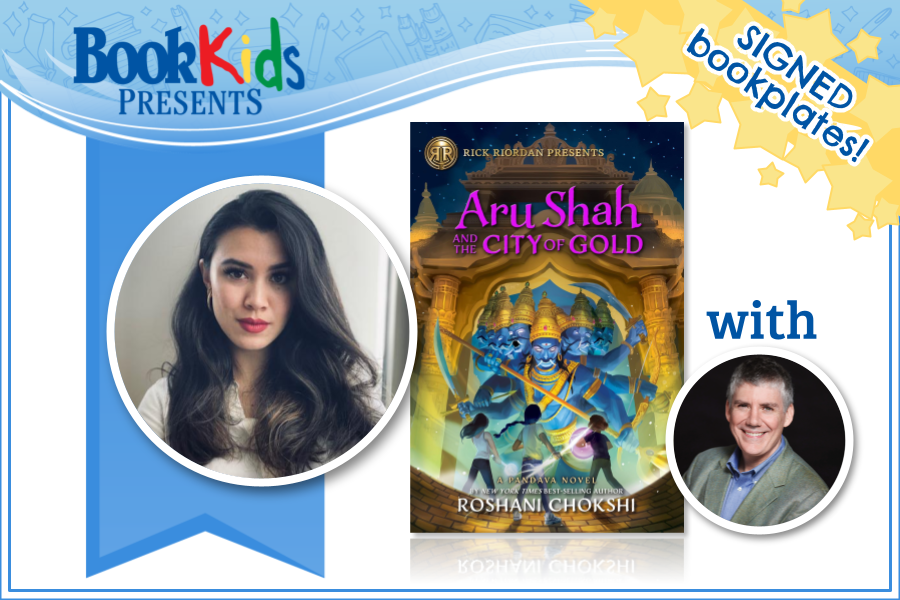 IN CONVERSATION WITH RICK RIORDAN!!!

ABOUT ARU SHAH AND THE CITY OF GOLD

*"Chokshi spins a fantastical narrative that seamlessly intertwines Hindu cosmology and folklore, feminism, and witty dialogue for an uproarious novel for young readers."--Kirkus (starred review of Aru Shah and the End of Time)

Aru Shah and her sisters--including one who also claims to be the Sleeper's daughter--must find their mentors Hanuman and Urvashi in Lanka, the city of gold, before war breaks out between the devas and asuras.

Aru has just made a wish on the tree of wishes, but she can't remember what it was. She's pretty sure she didn't wish for a new sister, one who looks strangely familiar and claims to be the Sleeper's daughter, like her.

Aru also isn't sure she still wants to fight on behalf of the devas in the war against the Sleeper and his demon army. The gods have been too devious up to now. Case in point: Kubera, ruler of the city of gold, promises to give the Pandavas two powerful weapons, but only if they win his trials. If they lose, they won't stand a chance against the Sleeper's troops, which will soon march on Lanka to take over the Otherworld.

Aru's biggest question, though, is why every adult she has loved and trusted so far has failed her. Will she come to peace with what they've done before she has to wage the battle of her life?

Filled with wondrous magic, unforgettable creatures, manipulative gods, and laugh-out-loud dialogue, this fourth book in the Pandava series, a fantasy adventure loosely based on mythology, will leave readers wishing they could read the finale right now.

Roshani Chokshi (www.roshanichokshi.com) is the author of the instant New York Times best-selling first book in the Pandava series, Aru Shah and the End of Time, and its sequels, Aru Shah and the Song of Death and Aru Shah and the Tree of Wishes. She also wrote the New York Times best-selling YA books The Star-Touched Queen,The Gilded Wolves, and The Silvered Serpents. The Pandava novels were inspired by the stories her grandmother told her as well as Roshani's all-consuming love for Sailor Moon. She lives in the south and says "y'all," but she doesn't really have a Southern accent. Follow her on Instagram @roshanichokshi.

Rick Riordan, dubbed “storyteller of the gods” by Publishers Weekly, is the author of four #1 New York Times best-selling middle grade series with more than 50 million copies sold in the US: Percy Jackson and the Olympians and The Heroes of Olympus, based on Greek and Roman mythology; the Kane Chronicles, based on Ancient Egyptian mythology; and Magnus Chase and the Gods of Asgard, based on Norse mythology. Rick collaborated with illustrator John Rocco on two #1 New York Times best-selling collections of Greek myths for the whole family: Percy Jackson’s Greek Gods and Percy Jackson’s Greek Heroes. Rick lives in Boston, Massachusetts with his wife and two sons. Follow him on Twitter at @camphalfblood.

Thank you for supporting Roshani Chokshi, Rick Riordan, and your local independent bookstore!