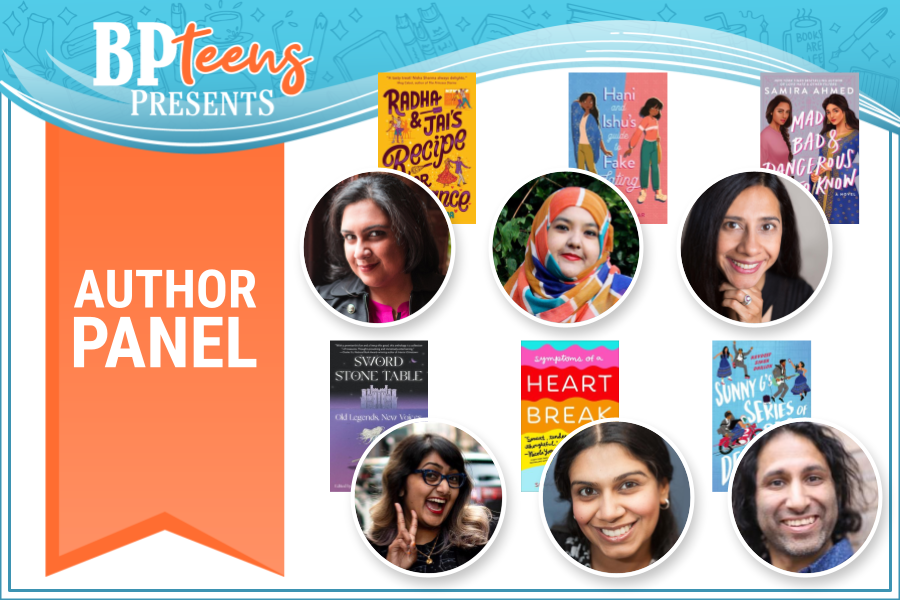 Symptoms of a Heartbreak (Paperback)

Nisha Sharma is the critically acclaimed author of My So-Called Bollywood Life, a Kirkus starred reviewed YA romance, and NPR best book of 2018. She is also the author of The Takeover Effect, a Library Journal starred reviewed adult contemporary romance, and the first installment of The Singh Family Trilogy. Her writing has been praised by Cosmopolitan, Entertainment Weekly, Teen Vogue, Buzzfeed, Hypable, and more.Nisha lives in New Jersey with her Alaskan husband, her cat Lizzie Bennett, and her dog Nancey Drew. She credits her father for her multiple graduate degrees, and her mother for her love of Jane Austen and Shah Rukh Khan. You can find her online at nisha-sharma.com or on Twitter and Instagram at @nishawrites.

ABOUT RADHA AND JAI'S RECIPE FOR ROMANCE

To All the Boys I Loved Before meets World of Dance in this delectable love story that combines food, dance, and a hint of drama to cook up the perfect romance.

Radha is on the verge of becoming one of the greatest kathak dancers in the world . . . until a family betrayal costs her the biggest competition of her life. Now she has left her Chicago home behind to follow her stage mom to New Jersey. At the Princeton Academy of the Arts, Radha is determined to leave performing in her past and reinvent herself from scratch.

Jai is captain of the Bollywood Beats dance team, ranked first in his class, and is an overachiever with no college plans. Tight family funds means medical school is a pipe dream, which is why he wants to make the most out of high school. When Radha enters his life, he realizes she's the exact ingredient he needs for a show-stopping senior year.

With careful choreography, both Radha and Jai will need to face their fears (and their families) if they want a taste of a happily ever after.

Adiba Jaigirdar is a Bangladeshi and Irish writer and teacher and the author of The Henna Wars, which Kirkus called “impossible to put down.” She is also a contributor for Book Riot. She lives in Dublin, Ireland.

ABOUT HANI AND ISHU'S GUIDE TO FAKE DATING

Everyone likes Humaira "Hani" Khan—she’s easy going and one of the most popular girls at school. But when she comes out to her friends as bisexual, they invalidate her identity, saying she can’t be bi if she’s only dated guys. Panicked, Hani blurts out that she’s in a relationship…with a girl her friends absolutely hate—Ishita "Ishu" Dey. Ishu is the complete opposite of Hani. She’s an academic overachiever who hopes that becoming head girl will set her on the right track for college. But Ishita agrees to help Hani, if Hani will help her become more popular so that she stands a chance of being elected head girl.

Despite their mutually beneficial pact, they start developing real feelings for each other. But relationships are complicated, and some people will do anything to stop two Bengali girls from achieving happily ever after.

Samira Ahmed was born in Bombay, India, and grew up in a small town in Illinois in a house that smelled like fried onions, cardamom, and potpourri. A graduate of the University of Chicago, she’s lived in Vermont, Chicago, New York City, and Kauai, where she spent a year searching for the perfect mango. Follow her on Twitter and Instagram @sam_aye_ahm.

ABOUT MAD BAD AND DANGEROUS TO KNOW

Smash the patriarchy. Eat all the pastries.

It’s August in Paris and 17-year-old Khayyam Maquet—American, French, Indian, Muslim—is at a crossroads. This holiday with her parents should be a dream trip for the budding art historian. But her maybe-ex-boyfriend is ghosting her, she might have just blown her chance at getting into her dream college, and now all she really wants is to be back home in Chicago figuring out her messy life instead of brooding in the City of Light.

Two hundred years before Khayyam’s summer of discontent, Leila is struggling to survive and keep her true love hidden from the Pasha who has “gifted” her with favored status in his harem. In the present day—and with the company of Alex, a très charmant teen descendant of Alexandre Dumas—Khayyam searches for a rumored lost painting, uncovering a connection between Leila and Alexandre Dumas, Eugène Delacroix, and Lord Byron that may have been erased from history.

Echoing across centuries, Leila and Khayyam’s lives intertwine, and as one woman’s long-forgotten life is uncovered, another’s is transformed.

Preeti Chhibber has written for SYFY, BookRiot, BookRiot Comics, The Nerds of Color, and The Mary Sue. She has work in the anthology A Thousand Beginnings and Endings, a collection of retellings of fairy tales and myths, and is the author of the Spider-Man: Far from Home tie-in Peter and Ned’s Ultimate Travel Journal for Marvel. She hosts the podcasts Desi Geek Girls and Strong Female Characters (SYFYWire) and has appeared on several panels at New York Comic Con, San Diego Comic Con, and on screen on the SYFY Network.

Here you'll find the Lady of the Lake reimagined as an albino Ugandan sorceress and the Lady of Shalott as a wealthy, isolated woman in futuristic Mexico City; you'll see Excalibur rediscovered as a baseball bat that grants a washed-up minor leaguer a fresh shot at glory and as a lost ceremonial drum that returns to a young First Nations boy the power and the dignity of his people. There are stories set in Gilded Age Chicago, '80s New York, twenty-first century Singapore, and space; there are lesbian lady knights, Arthur and Merlin reborn in the modern era for a second chance at saving the world and falling in love--even a coffee shop AU. Brave, bold, and groundbreaking, the stories in Sword Stone Table will bring fresh life to beloved myths and give long-time fans a chance to finally see themselves in their favorite legends.

Sona Charaipotra is the author of Symptoms of a Heartbreak. She is a writer who has worked as a celebrity reporter at People and TeenPeople and has contributed to publications ranging from the New York Times to TeenVogue. She uses her master's in screenwriting from NYU and her MFA in creative writing from the New School to poke plot holes in her favorite teen TV shows—for work, of course. She is the cofounder of CAKE Literary, a boutique book packaging company with a decidedly diverse bent, and the coauthor (with Dhonielle Clayton) of the YA dance dramas Tiny Pretty Things and Shiny Broken Pieces, as well as the psychological thriller The Rumor Game. She is a proud We Need Diverse Books team member.

ABOUT SYMPTOMS OF A HEARTBREAK

Sixteen-year-old Saira has always juggled family, friendships, and her Girl Genius celebrity. Now, as the youngest med school graduate ever, she can finally achieve her mission to treat young people dealing with cancer.

But proving herself in life-or-death situations is tough when everyone from her boss to her patients can't see past her age to trust her skills. And working in the same hospital as her mom isn't making things any easier!

Life gets even more complicated when Saira falls for a teenage patient. To improve his chances, she risks her lifelong dream—and it could cost her everything.

In her solo debut, Sona Charaipotra brings us a compelling #ownvoices protagonist who’s not afraid to chase what she wants. Symptoms of a Heartbreak goes from romantic comedy highs to tearjerker lows and is the ultimate cure-all for every reader needing an infusion of something heartfelt.

Navdeep Singh Dhillon has worked as a linguist in the U.S. Navy, a photographer, dishwasher, paperboy, ESL teacher in China, and is currently adjunct professor of creative writing and composition at the Borough of Manhattan Community College. He was born in England and spent his childhood in East and West Africa, the Middle East, and the Central Valley of California. He holds an MFA in creative writing from California State University, Fresno, a post-grad certificate from the Writers' Institute at CUNY, and is a proud two-time VONA fiction workshop alum. He is obsessed with Bhangra, Bollywood, baking, and Brazilian jiujitsu. He lives in Jersey City with his wife, Sona, and their two children.

For fans of Sandhya Menon and Adam Silvera, a prom-night romantic-comedy romp about a Sikh teen's search for love and identity

Sunny debuts his new look at prom, which he's stuck going to alone. He's skipping the big fandom party—the one where he'd normally be in full cosplay, up on stage playing bass with his band and his best friend, Ngozi—in favor of the Very Important Prom Experience. An experience that's starting to look like a bust.

Enter Mindii Vang, a girl with a penchant for making rash decisions of her own, starting with stealing Sunny's notebook. When Sunny chases after her, prom turns into an all-night adventure—a night full of rash, wonderful, romantic, stupid, life-changing decisions.