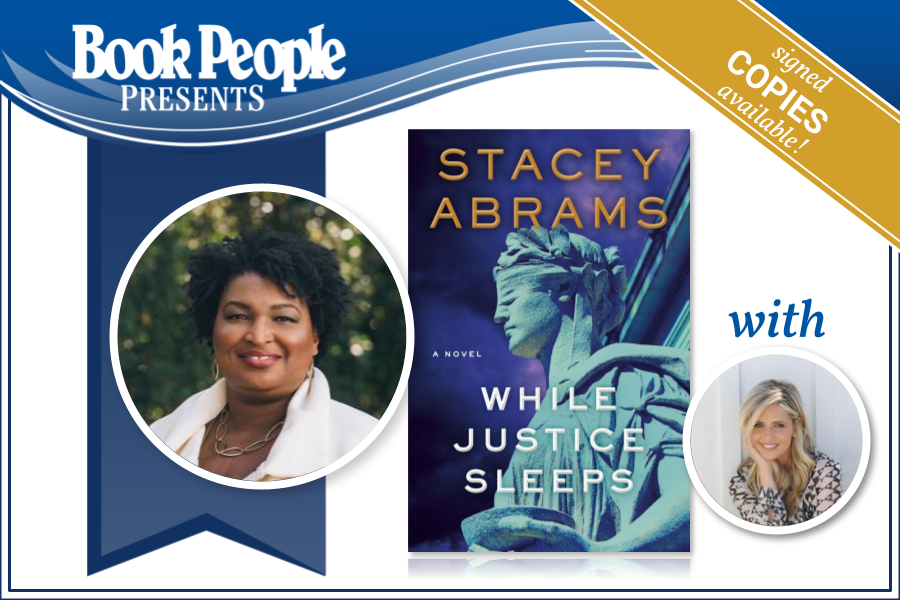 Austin, Texas! Stacey Abrams is coming to Austin as part of her virtual tour in support of her new Supreme Court thriller While Justice Sleeps! She'll be joined in conversation with Sarah Michelle Gellar for one night only—you don't want to miss out. All tickets include access to our event as well as a signed copy of While Justice Sleeps to be shipped straight to your door!

About While Justice Sleeps

From celebrated national leader and bestselling author Stacey Abrams, While Justice Sleeps is a gripping, complexly plotted thriller set within the halls of the U.S. Supreme Court.

Avery Keene, a brilliant young law clerk for the legendary Justice Howard Wynn, is doing her best to hold her life together—excelling in an arduous job with the court while also dealing with a troubled family. When the shocking news breaks that Justice Wynn—the cantankerous swing vote on many current high-profile cases—has slipped into a coma, Avery’s life turns upside down. She is immediately notified that Justice Wynn has left instructions for her to serve as his legal guardian and power of attorney. Plunged into an explosive role she never anticipated, Avery finds that Justice Wynn had been secretly researching one of the most controversial cases before the court—a proposed merger between an American biotech company and an Indian genetics firm, which promises to unleash breathtaking results in the medical field. She also discovers that Wynn suspected a dangerously related conspiracy that infiltrates the highest power corridors of Washington.

As political wrangling ensues in Washington to potentially replace the ailing judge whose life and survival Avery controls, she begins to unravel a carefully constructed, chesslike sequence of clues left behind by Wynn. She comes to see that Wynn had a much more personal stake in the controversial case and realizes his complex puzzle will lead her directly into harm’s way in order to find the truth. While Justice Sleeps is a cunningly crafted, sophisticated novel, layered with myriad twists and a vibrant cast of characters. Drawing on her astute inside knowledge of the court and political landscape, Stacey Abrams shows herself to be not only a force for good in politics and voter fairness but also a major new talent in suspense fiction.

Stacey Abrams is the two-time New York Times bestselling author of Our Time Is Now and Lead from the Outside, an entrepreneur, and a political leader. A tax attorney by training, she served eleven years in the Georgia House of Representatives, seven as Minority Leader, and became the 2018 Democratic nominee for governor of Georgia, where she won more votes, at the time, than any other Democrat in the state’s history. She has launched multiple organizations devoted to voting rights, training and hiring young people of color, and tackling social issues at the state, national, and international levels. She is the founder of Fair Fight, Fair Count, and the Southern Economic Advancement Project. Abrams is a lifetime member of the Council on Foreign Relations and sits on the advisory board of Climate Power 2020 and the advocacy board of the Women’s National Basketball Players Association. She has received degrees from Spelman College, the LBJ School of Public Affairs at the University of Texas, and Yale Law School.

Sarah Michelle Gellar is well known for her work on the small screen including CBS’ The Crazy Ones opposite Robin Williams, the CW’s Ringer, her role as the iconic Buffy the Vampire Slayer, and ABC’s All My Children.

Gellar’s film credits include The Grudge, I Know What You Did Last Summer, Cruel Intentions, and many others.

Off screen, Gellar lends her time and support to child and hunger organizations as an advocate and activist. She works closely with No Kid Hungry, This is About Humanity and Good+ as well as the nonprofit organization CARE.

By purchasing a ticket from BookPeople, you are not only supporting a local, independent business, but you are also showing publishers that they should continue sending authors to BookPeople.