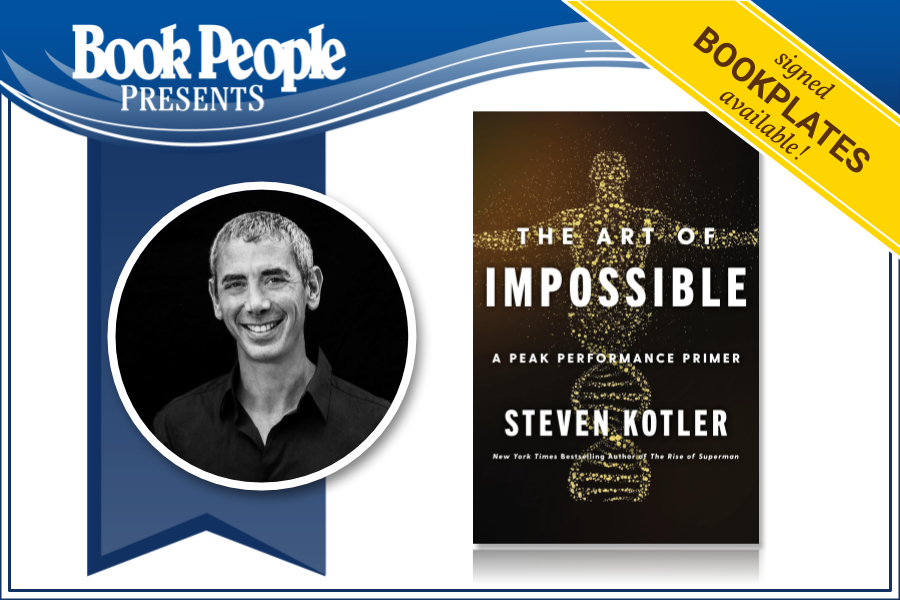 The Art of Impossible: A Peak Performance Primer (Hardcover)

Presented in partnership with Harper Wave

In conversation with Scott Barry Kaufman

Learn about The Art of Impossible from bestselling author and peak performance expert Steven Kotler as he decodes the secrets of those elite performers—athletes, artists, scientists, CEOs and more—who have changed our definition of the possible, teaching us how we too can stretch far beyond our capabilities, making impossible dreams much more attainable for all of us.

This free event is a partnership between Book People and Harper Wave, who will host this event on Crowdcast. A book purchased at Book People available upon its January 19th release, will include a signed bookplate from the author.

ABOUT THE ART OF IMPOSSIBLE

Bestselling author and peak performance expert Steven Kotler decodes the secrets of those elite performers—athletes, artists, scientists, CEOs and more—who have changed our definition of the possible, teaching us how we too can stretch far beyond our capabilities, making impossible dreams much more attainable for all of us.

We are capable of so much more than we know—that’s the message at the core of The Art of Impossible. Building upon cutting-edge neuroscience and over twenty years of research, bestselling author, peak performance expert and Executive Director of the Flow Research Collective, Steven Kotler lays out a blueprint for extreme performance improvement. If you want to aim high, here is the playbook to make it happen!

Inspirational and aspirational, pragmatic and accessible, The Art of Impossible is a life-changing experience disguised as a how-to manual for peak performance that anyone can use to shoot for the stars . . . space-suit, not included.

One of the world's leading experts in peak performance, Steven Kotler is an author, award-winning journalist, and Founder and Executive Director of the Flow Research Collective. He has written twelve books, including the national bestsellers: The Future is Faster Thank You Think, The Rise of Superman, Stealing Fire, Abundance, and Bold. His work has been nominated for two Pulitzer Prizes, been translated into more than forty languages and appeared in over one hundred publications, including the New York Times, The Atlantic, the Wall Street Journal, Forbes, Wired, and Time. He lives with his wife, Joy Nicholson, and too many dogs, in the mountains of northern Nevada.

Scott Barry Kaufman, Ph.D., is a humanistic psychologist exploring the depths of human potential. He has taught courses on intelligence, creativity, and well-being at Columbia University, NYU, the University of Pennsylvania, and elsewhere. He hosts the #1 psychology podcast in the world— The Psychology Podcast— and is author and/or editor of 9 books, including Transcend: The New Science of Self-Actualization, Wired to Create: Unravelling the Mysteries of the Creative Mind (with Carolyn Gregoire), and Ungifted: Intelligence Redefined. In 2015, he was named one of "50 Groundbreaking Scientists who are changing the way we see the world" by Business Insider. Find out more at http://ScottBarryKaufman.com.

Thank you for supporting Steven Kotler and your local independent bookstore!