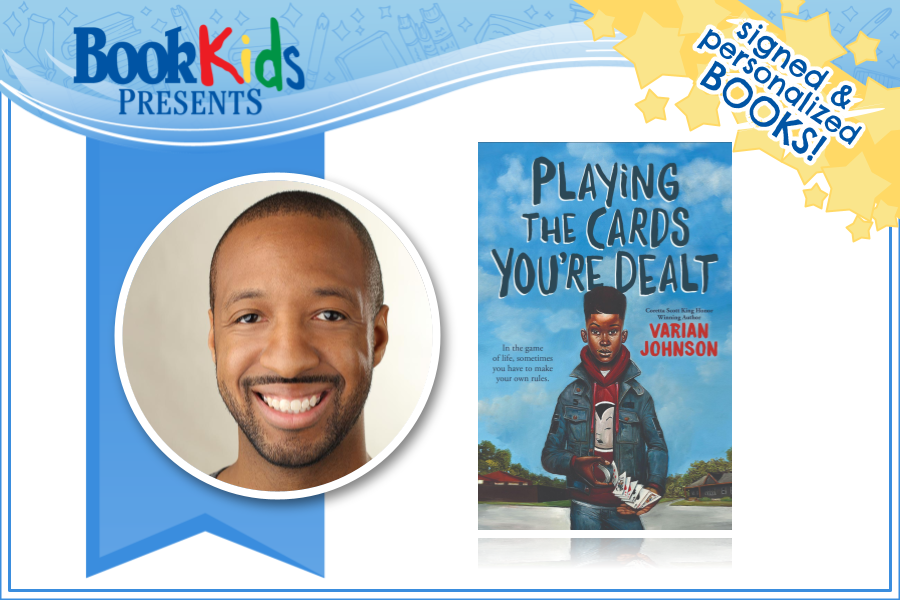 Playing the Cards You're Dealt (Hardcover)

ABOUT PLAYING THE CARDS YOU'RE DEALT

“With a deft hand, Johnson shows us there's no such thing as "too young" when it comes to questioning big ideas like manhood, or even family.” –Jason Reynolds, New York Times bestselling author of Look Both Ways and Stamped

Literary powerhouse and Coretta Scott King Honor- and Boston Globe / Horn Book Honor-winning author of The Parker Inheritance Varian Johnson explores themes of toxic masculinity and family legacy in this heartfelt, hopeful story of one boy discovering what it really means to be a man.

SECRETS ARE ALWAYS A GAMBLE

Ten-year-old Anthony Joplin has made it to double digits! Which means he's finally old enough to play in the spades tournament every Joplin Man before him seems to have won. So while Ant's friends are stressing about fifth grade homework and girls, Ant only has one thing on his mind: how he'll measure up to his father's expectations at the card table.

Then Ant's best friend gets grounded, and he's forced to find another spades partner. And Shirley, the new girl in his class, isn't exactly who he has in mind. She talks a whole lot of trash -- way more than his old partner. Plus, he's not sure that his father wants him playing with a girl. But she's smart and tough and pretty, and knows every card trick in the book. So Ant decides to join forces with Shirley -- and keep his plans a secret.

Only it turns out secrets are another Joplin Man tradition. And his father is hiding one so big it may tear their family apart...

Varian Johnson is the author of several novels for children and young adults, including The Parker Inheritance, which won both Coretta Scott King Author Honor and Boston Globe/Horn Book Honor awards, The Great Greene Heist, an ALA Notable Children’s book, a Kirkus Reviews Best Book, and a Texas Library Association Lone Star List selection, and the graphic novel Twins co-created with Shannon Wright, an NPR Best Book. He lives with his family near Austin, Texas. You can visit him on the web at varianjohnson.com and @varianjohnson

New York Times–bestselling author Erin Entrada Kelly was awarded the Newbery Medal for Hello, Universe and a Newbery Honor for We Dream of Space. She grew up in Lake Charles, Louisiana, and now lives in Delaware. She is a professor of children’s literature in the graduate fiction and publishing programs at Rosemont College, where she earned her MFA, and is on the faculty at Hamline University. Her short fiction has been nominated for the Philippines Free Press Literary Award for Short Fiction and the Pushcart Prize. Erin Entrada Kelly’s debut novel, Blackbird Fly, was a Kirkus Best Book, a School Library Journal Best Book, an ALSC Notable Book, and an Asian/Pacific American Literature Honor Book. She is also the author of The Land of Forgotten Girls, winner of the Asian/Pacific American Award for Literature; You Go First, a Spring 2018 Indie Next Pick; Lalani of the Distant Sea, an Indie Next Pick; and Maybe Maybe Marisol Rainey which she also illustrated. The author’s mother was the first in her family to immigrate to the United States from the Philippines, and she now lives in Cebu