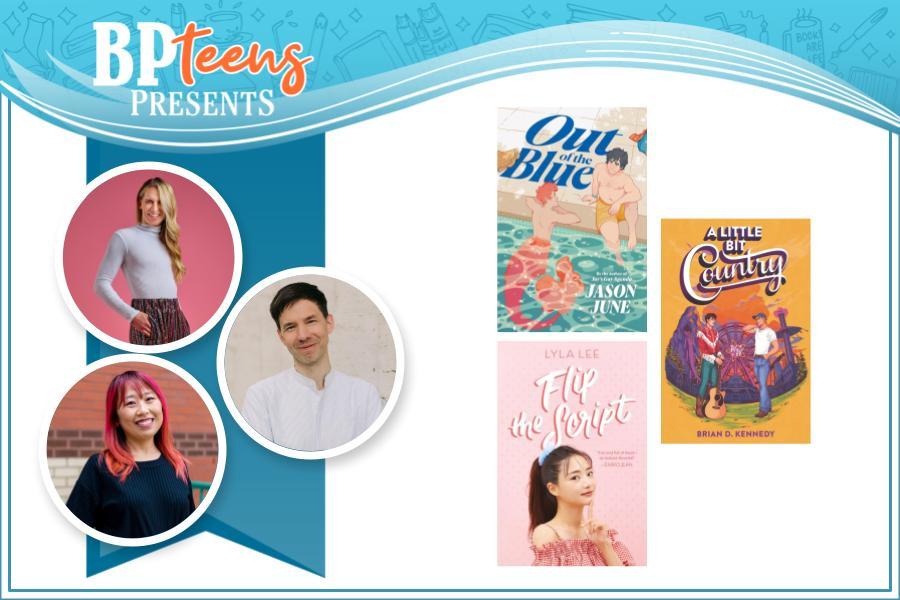 Out of the Blue (Hardcover)

Join Jason June, Brian D. Kennedy, and Lyla Lee in celebration of their new books, OUT OF THE BLUE, A LITTLE BIT COUNTRY, and FLIP THE SCRIPT, followed by a Q&A.

ABOUT OUT OF THE BLUE

From Jason June, author of the breakout teen debut novel Jay’s Gay Agenda, comes Out of the Blue, a stand-alone dual POV queer rom-com that asks if love is enough to change everything you’ve grown up believing. Perfect for fans of Cemetery Boys by Aiden Thomas and Deep Blue by Jennifer Donnelly.

Crest is not excited to be on their Journey: the month-long sojourn on land all teen merfolk must undergo. The rules are simple: Help a human within one moon cycle and return to Pacifica to become an Elder—or fail and remain stuck on land forever. Crest is eager to get their Journey over and done with. Humans are disgusting. They’ve polluted the planet so much that there’s a floating island of trash that’s literally the size of a country.

In Los Angeles with a human body and a new name, Crest meets Sean, a human lifeguard whose boyfriend has recently dumped him. Crest agrees to help Sean make his ex jealous and win him back. But as the two spend more time together, and Crest’s perspective on humans begins to change, they’ll soon be torn between two worlds. And fake dating just might lead to real feelings . . .

This sophomore novel from Jason June dives into the many definitions of the word home and shows how love can help us find the truest versions of ourselves.

Jason June (it's a two-name first name, like Mary-Kate without the hyphen or the Olsen twin) is a writer mermaid who loves to create young adult rom-coms full of love and lust and hijinks. His debut YA, JAY'S GAY AGENDA, released last year, with his queer merperson fish-out-of-water tale, OUT OF THE BLUE, publishing MerMay 31st, 2022. JJ lives in Austin, Texas with his husband, Pomeranian, and avid love of Laura Dern.

ABOUT A LITTLE BIT COUNTRY

Dumplin' meets Simon vs. the Homo Sapiens Agenda in this heartfelt and funny contemporary romance inspired by Dollywood, about two boys who fall in love against the backdrop of a country music-themed amusement park, from debut author Brian D. Kennedy. Perfect for fans of Erin Hahn, Phil Stamper, and David Levithan.

Emmett Maguire wants to be country music’s biggest gay superstar—a far reach when you’re seventeen and living in Illinois. But for now, he’s happy to do the next best thing: Stay with his aunt in Jackson Hollow, Tennessee, for the summer and perform at the amusement park owned by his idol, country legend Wanda Jean Stubbs.

Luke Barnes hates country music. As the grandson of Verna Rose, the disgraced singer who had a famous falling out with Wanda Jean, Luke knows how much pain country music has brought his family. But when his mom’s medical bills start piling up, he takes a job at the last place he wants: a restaurant at Wanda World.

Neither boy is looking for romance, but sparks fly when they meet—and soon they’re inseparable. Until a long-lost secret about Verna and Wanda comes to light, threatening to unravel everything.

Will Emmett and Luke be able get past the truths they discover…or will their relationship go down in history as just another Sad Country Love Song?

Brian D. Kennedy was born and raised in Minnesota and now lives in New York City with his husband and their miniature Schnauzer. When not writing, he can be found working at an LGBTQ non-profit and buying more books than he can possibly read. A Little Bit Country is his debut novel.

ABOUT FLIP THE SCRIPT

In this simmering, joyous novel, I’ll Be the One author Lyla Lee delivers a tender romance set between two brave teens who decide that when the script isn’t working, it’s time to rewrite it themselves.

The first rule of watching K-dramas: Never fall in love with the second lead.

As an avid watcher of K-dramas, Hana knows all the tropes to avoid when she finally lands a starring role in a buzzy new drama. And she can totally handle her fake co-star boyfriend, heartthrob Bryan Yoon, who might be falling in love with her. After all, she promised the TV producers a contract romance, and that’s all they’re going to get from her.

But when showrunners bring on a new lead actress to challenge Hana’s role as main love interest—and worse, it’s someone Hana knows all too well—can Hana fight for her position on the show, while falling for her on-screen rival in real life?

Lyla Lee is the author of I’ll Be the One and the Mindy Kim series for younger readers. Born in a small town in South Korea, she’s since lived in various cities throughout the United States. Inspired by her English teacher, she started writing her own stories in fourth grade and finished her first novel at the age of fourteen. After studying psychology and cinematic arts at the University of Southern California and working in Hollywood, Lyla now lives in Dallas, Texas. When she’s not writing, she is teaching kids and searching for the perfect bowl of shaved ice.