[Virtual] Writers' League of Texas On the Craft of Writing: Horror Novels 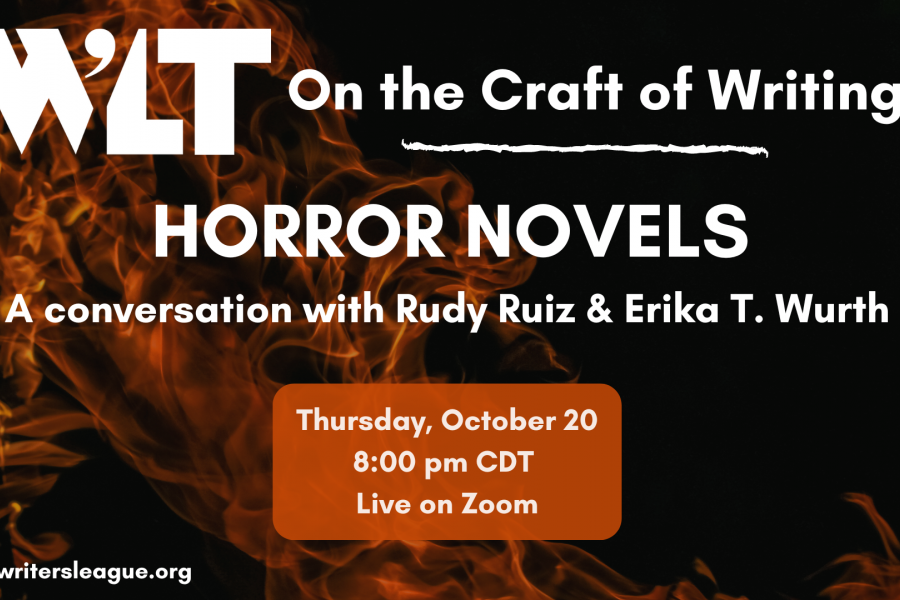 WLT hosts On the Craft of Writing talks a few times a year, partnering with an indie bookstore or other community organization, featuring authors discussing their craft in relation to their newest releases.

In October, we’ll be joined by authors Rudy Ruiz and Erika T. Wurth to talk about writing horror novels.

Join us as we explore how these two authors approach the horror genre. From leaning into or away from horror tropes, to scaring readers, accomplishing twists and turns, and more, we’ll discuss what it takes to write a horror novel that will keep readers up at night.

If you have questions about the craft of horror novels, please consider sharing them with us ahead of time by filling out this simple Google form. We’ll also leave time for questions during the event.

RSVP to receive your link to the live webinar.

Rudy Ruiz is a writer of literary fiction, essays and political commentary. His earliest works were published at Harvard, where he studied literature and creative writing, and was awarded a Ford Foundation grant to support his writing endeavors. Seven for the Revolution was Ruiz’s fiction debut. The collection of short stories won four International Latino Book Awards. Ruiz’s short fiction has appeared in literary journals including BorderSenses, The Ninth Letter, New Texas, and the Notre Dame Review. In 2017, Rudy Ruiz was awarded the Gulf Coast Prize in Fiction. In 2020, Ruiz was a finalist for both the Texas Institute of Letters’ Best Short Story Award as well as the Texas Observer’s annual Short Story Contest.

In 2020, Blackstone Publishing released Ruiz’s novel, The Resurrection of Fulgencio Ramirez. The novel received critical acclaim and was named one of the “Top 10 Best First Novels of 2020” by the American Library Association’s Booklist. The Southern Review of Books stated: “Ruiz’s prose is buoyant and immersive…Its effusive descriptions are reminiscent of Laura Esquivel.” The novel was longlisted for the Reading the West Award and a Finalist for the Western Writers of America Silver Spur Award for Best Contemporary Novel. It also was awarded two Gold Medals at the International Latino Book Awards, including the Rudolfo Anaya Prize for Best Latino Focused Fiction and Best Audio Book. Ruiz’s new novel, Valley of Shadows, was recently published Sept. 20, 2022 by Blackstone Publishing.

Erika T. Wurth’s literary-horror novel, White Horse, is forthcoming with Flatiron/Macmillan. Her work has appeared or is forthcoming in numerous journals including Buzzfeed, Boulevard, Lithub, The Writer’s Chronicle, and The Kenyon Review. She is a Kenyon and Sewanee fellow, and a narrative artist for the Meow Wolf Denver installation. She is represented by Rebecca Friedman (books) and Dana Spector, CAA (film). She is an urban Native of Apache/Chickasaw/Cherokee descent and was raised outside of Denver, where she lives with her partner, her two stepchildren, and her extremely fluffy dogs.

Thank you for supporting the WLT and your local independent bookstore!