Misadventure is a bracing collection of stories that map what happens when desire and control between men goes very, very wrong. In the title story, a man struggles to understand his role in a terrible accident at his apartment complex. In "Cowboys," two boys invent a game of bondage and strength and find that the game follows them to college, to bachelor parties, and into clandestine hotel rooms. A man explores his past lovers and medical history in alphabetical order in "Formers (By Alphabet)."

In Misadventure, men search for themselves, for each other, for the sources of sanity and sickness, of power and grief. In frank, distinctive prose, Grider challenges the conventional gay narrative and asks the reader to reimagine the kind of work short fiction should do. This book will grab you by the throat, but be warned–it may never let go.

Nicholas Grider is an artist and writer with an MFA in both from CalArts; Misadventure is his debut collection of short stories and he is currently at work on a novel and a series of documentary photography projects.

"A dark and luscious hell-ride through the damaged but nonetheless appealing rituals of bondage. These are tantalizing and difficult stories in which fantasy and reality bleed (quite literally) into one another. That Grider can couple this content with a carefully considered form and language that feels like it's always finding exactly the right word is all the more impressive." — Brian Evenson, author of Immobility and Windeye

"In Misadventure, Nicholas Grider's captivating narrators attempt to establish control over their experiences through a system of catalogues and indexes, confessions and well-rehearsed tales. But despite their grasping, each of these compelling stories is ruled not by certainty but by maybe, by sometimes, by 'this is not necessarily a proclamation of anything'–and so we finally sense behind their pages the nervous heart of the modern man, stubbornly clinging to a faded authority, now more desperately than ever before." — Matt Bell, author of In the House upon the Dirt between the Lake and the Woods 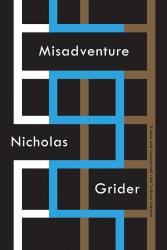