The Peacemaker: Ronald Reagan, the Cold War, and the World on the Brink 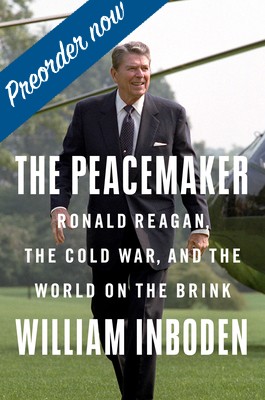 A masterful account of how Ronald Reagan and his national security team confronted the Soviets, reduced the nuclear threat, won the Cold War, and supported the spread of freedom around the world.

“Remarkable… a great read.”—Robert Gates • “Mesmerizing… hard to put down.”—Paul Kennedy • “Clearly written, thoroughly researched, full of fresh information… will shape all future studies of the role the United States played in ending the Cold War.”—John Lewis Gaddis • “A major contribution to our understanding of the Reagan presidency and the twilight of the Cold War era.”—David Kennedy

With decades of hindsight, the peaceful end of the Cold War seems a foregone conclusion. But in the early 1980s, most experts believed the Soviet Union was strong, stable, and would last into the next century. Ronald Reagan entered the White House with no certainty of what would happen next, only an overriding faith in democracy and an abiding belief that Soviet communism—and the threat of nuclear war—must end.

The Peacemaker reveals how Reagan’s White House waged the Cold War while managing multiple crises around the globe. From the emergence of global terrorism, wars in the Middle East, the rise of Japan, and the awakening of China to proxy conflicts in Latin America, Africa, and Asia, Reagan’s team oversaw the worldwide expansion of democracy, globalization, free trade, and the information revolution. Yet no issue was greater than the Cold War standoff with the Soviet Union. As president, Reagan remade the four-decades-old policy of containment and challenged the Soviets in an arms race and ideological contest that pushed them toward economic and political collapse, all while extending an olive branch of diplomacy as he sought a peaceful end to the conflict.

Reagan’s revolving team included Secretaries of State Al Haig and George Shultz; Secretaries of Defense Caspar Weinberger and Frank Carlucci; National Security Advisors Bill Clark, John Poindexter, and Bud McFarlane; Chief of Staff James Baker; CIA Director Bill Casey; and United Nations Ambassador Jeane Kirkpatrick. Talented and devoted to their president, they were often at odds with one another as rivalries and backstabbing led to missteps and crises. But over the course of the presidency, Reagan and his team still developed the strategies that brought about the Cold War’s peaceful conclusion and remade the world.

Based on thousands of pages of newly-declassified documents and interviews with senior Reagan officials, The Peacemaker brims with fresh insights into one of America’s most consequential presidents.  Along the way, it shows how the pivotal decade of the 1980s shaped the world today.